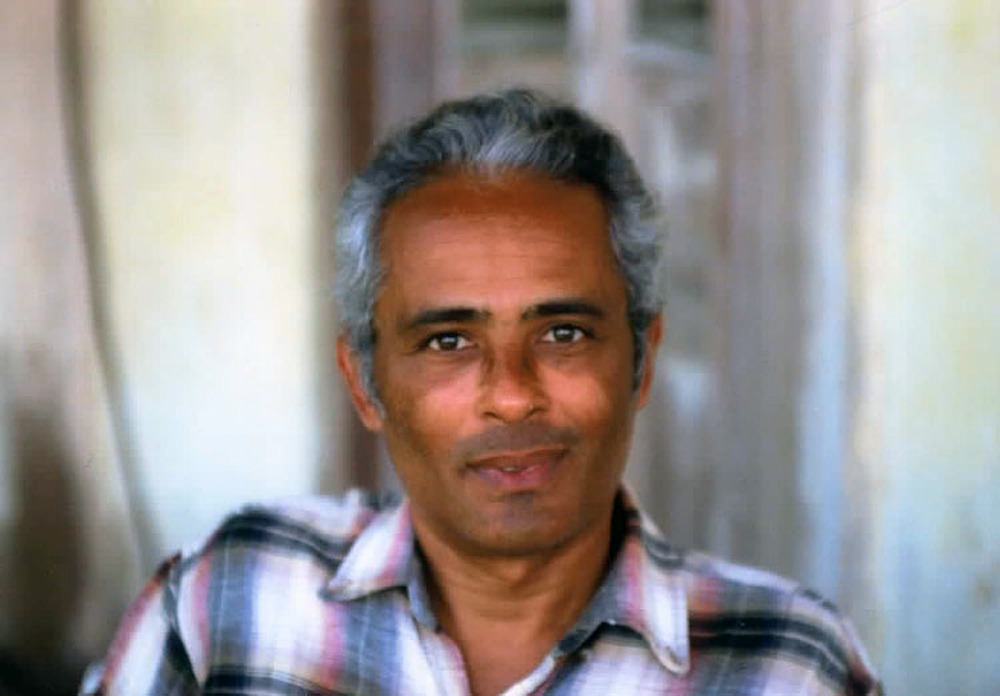 Eddy visited us from Cuba this last summer, 2015 as part of our 3 Cuban artist exhibition.  While here he painted with Taylor Ikin at the Dunedin Fine Arts Center, a small museum).  The director was so taken with his painting that he found an interpreter and Eddy gave a class on painting with light and shadows.  They are inviting him back to do a show in the future.

Eddy Ochoa Guzmán might at first appear to be a photorealist, but one can see that his passion for nature supercedes the dehumanizing eye of the camera.  He delights in nature and his works convey that love without the cold, unrelenting view of the photorealist.  There is no harshness in his work, no severity, but instead an obsession with the lush greenery of Cuba. In fact, Ochoa tells us that he is love with every shade of green.

Ochoa was born in Baracoa and carries with him his childhood recollection of the Yumuri River from the vantage point of Alto de Fuerte, the old Spanish fortress. He recounts that the immense river inspired both love and fear in him. That setting stays as his strongest memory and, even though he moved the images of his birthplace have never faded.

When Ochoa was older, he attended the Fine Arts School in Pinar del Rio which is located in the westernmost province of Cuba.  This experience afforded him the opportunity to become acquainted with the exceptional natural beauty of another region. The Viñales Valley, with its fascinating limestone outcroppings, provided fertile ground for tobacco plantations, palms and orchids.  Here, Ochoa learned landscape technique from maestro Domingo Ramos. Each day he was able to observe Ramos creating landscapes of the valley.  Later, when Ochoa had returned to Santiago, he studied with Armando Rodriguez and acquired more landscape training.  Eventually, he studied at José Joaquín Tejada Art School where he found that some scorned landscape painting.  Ochoa never lost his passion for it and his efforts were supported by Ferrer Cabello and Aguilera Vincente.

Eventually, Ochoa joined the police force where he used his artistic ability to draw detailed police sketches of criminals.  He continues to paint landscapes and says that his work with the police gave him the opportunity to travel throughout Cuba and observe the countryside.  He remarks that landscape artists have to look around a lot to commit to memory all of the elements that may help them later on.

One phase of his paintings was conceived while on a trip to the town of Dos Bocas.  There Ochoa saw a mountain that looked like a woman’s hair hanging loose, with a background of palm trees.  This started the phase in which all of his landscapes were like women with long hair.

Ochoa looks at the landscape from an ecological point of view. He creates very thick foliage with a wealth of greens, bringing it to life, making it look as real as possible, preferring luxuriance to detail. He often includes bodies of water because he feels that water has a matchless beauty and is a source of life. There are no humans in his paintings, but sometimes he paints a road where humans have been to show their zest of life.

Once when Ochoa was hospitalized, he found inspiration for his series of Nocturnos (nocturnal landscapes). While lying there at night, he saw a lighthouse that illuminated one spot in the landscape and felt amazed that man could artificially light up just one part of an otherwise unseen vista. His Nocturnos evolved from this experience.  These paintings evoke a sense of restlessness in us despite their apparent tranquility.  The restlessness comes from the force of light within the darkness of the landscape.  Ochoa searches for light and places it artificially in a spot that seems to come from a mystical place, maybe from behind the viewer, from an unknown place. This gives his Nocturnos a surreal luminosity and makes the paintings fluctuate between realism and mysticism.  The charm of this technique lies in achieving the force of light within the darkness of the landscape.

Ochoa says,” Art should fill people with beauty and the freshness of the landscape.  In the midst of this violent world we live in, landscapes are a touch of harmony and joy.”