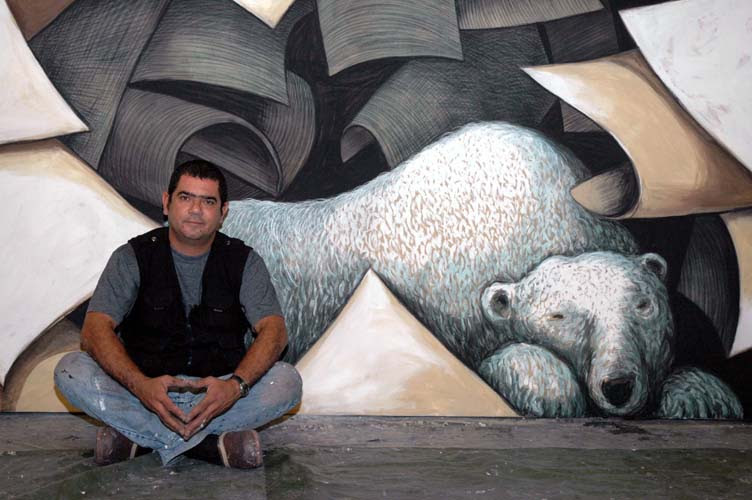 Carlos René Aguilera Tamayo was born in Santiago de Cuba in 1965. In addition to exhibiting widely in Cuba, he has also shown his work in New York, the Dominican Republic, throughout Eastern and Western Europe and Latin America. In1996 he won a gold medal at the Third Caribbean and Central American Biennial in Santo Domingo.

From the beginning of his professional career Aguilera has been investigating the ongoing struggle between the will to create order and the countervailing forces of chaos. His use of color has come later in his career. Prior to 1998 most of his work was in black and white because he didn’t want color to distract from his ideas. But in the last ten years or so he has grown confident enough to use it to enhance the forces he is framing. However, he remains conservative in its use. Greens and blues are dominant in most of the backgrounds of his paintings while the figures in the foregrounds are generally rendered in pinks and whites.

Aguilera is a warrior as well as a painter. He is a “warrior” in the sense that we use the word to refer to the fighting men of the classic epics and romances of the early Greeks and Anglo-Saxons and to the great Native American chiefs. To call these men “soldiers” would be inappropriate. A warrior is a leader who fights to advance his cause with his spirit as much as with his weapons. Aguilera’s paintings are records of his battles as a patriot and as an artist.

Early on he appropriated the image of the polar bear as his signature. The polar bear is clearly an ironic image out of place in tropical Cuba as were the Europeans who colonized the Caribbean, the African slaves they brought with them, and most recently the Russians. The role of the bear changes from painting to painting – sometimes he is merely a witness to the struggle around him, other times he is aggressively attacking other figures. Very often he is just rooting around the ruins he finds in his territory. Aguilera has called the bear “the noise in the machine,” the price exacted by nature for trying to improve on it.

He frequently uses a tower as a counterpoint to the bear. The tower generally represents utopian efforts to build something lasting, referencing both the tower of Babel and Tatlin’s tower. Vladimir Tatlin was a Russian artist who was commissioned by the Soviets in 1919 to design a monument to the Third Communist International. The project was never built because all the resources of the new Soviet state has to be used to combat starvation, but it became known as Tatlin’s tower and became a symbol Russian avant-garde architecture and International Modernism. The juxtaposition of the bear with the tower is a direct commentary on the apparently chaotic forces of nature interacting with the utopian efforts to organize it.

Another counterpoint to the bear is Aguilera’s use of the angel. The angel ideally possesses both physical prowess and spiritual fortitude. Sometimes he morphs the angel into a modern day gladiator on a skateboard as in Camouflage for an Urban Gladiator. Other times the angel becomes Icarus whose wings made of bulletproof Kevlar are ironically riddled with bullets and who falls to earth to be torn apart by vicious dogs while apathetic soldiers stare off into space. Often the angels degenerate into heads without bodies or bodies without heads as in Warriors Killing the Wise Men. In Preparing for the Expedition Aguilera indulges in self-mockery by painting the angel as an African warrior with his face inside a polar bear skull (reminiscent of the Aztec eagle warrior), one hand holding a shield made from the bear’s fur and his torso encased in bananas.

Aguilera’s use of various non-painterly techniques to render the backgrounds of his paintings is evidence of his fundamentally optimistic view of nature and the human condition within it. Many of his paintings have dripping backgrounds that he creates using a batik technique. The dripping represents sap, blood, and water, primordial liquor that permeates everything. It is the life force that both erodes and regenerates. Sometimes he creates his backgrounds by carving a pattern out of Styrofoam and stamping the background onto the canvas. Other times he paints an aerial view of his native city of Santiago de Cuba as the background.

One of his most epic paintings is called The Flood and on one level it is a description of the political situation in Cuba today. The green background is stamped with globular shapes with tails that can represent raindrops, suggest images of falling fruit, even sperm. The four figures are four responses to the political crisis facing Cuba. The polar bear is sitting down, indifferent to the rising water and even the bullet-like projectile at his rear. There is a human figure that has climbed a tree to escape the flood. A mechanical horse is rearing up on its hind legs in a panic. But the focus of the painting is the Mambi figure with a sword and long oar who is clearly preparing to launch a boat, not to come to Miami, but to ride out the flood and continue to build an independent Cuba. A Mambi is a soldier from Cuba’s independence struggle in the late 19th and early 20th centuries.

In the broadest sense, Aguilera’s paintings are about process, not ends and not means. As the Cowboy says to the Dude in the Coen brother’s movie The Big Lebowski, “Some days you get the bear and some days the bear gets you.” It would be nice to see Aguilera and Cuba get the bear.