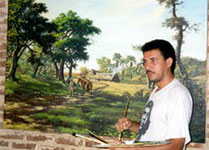 This artist is essentially self-taught, although he did take a few classes at the community cultural center in his hometown and was instructed by professors at the Manuel del Socorro Rodríguez Visual Arts School in Bayamo.

Although he does all kinds of paintings, he has concentrated mainly on rural landscapes revealing the habits and daily life of the Cuban campesinos, thereby combining traditional approaches with realism. His work often has environmental themes. He has participated in the Cucalambé Festivals in Las Tunas.

He and his brother, also a visual artist, have become major representatives of landscape painting in Granma province, and he has participated regularly in municipal and provincial expositions. He has been awarded municipal, provincial and national prizes.

At age 30, with 15 years devoted to art, he has had four personal exhibitions and almost 20 with other artists. In 1999 he headed a collective show entitled “The Cuban Phenomenon” at the Asheville Gallery in North Carolina, United States.

He does painting, drawing, engraving, ceramics and applied arts.
He currently lives and works as an independent artist in Bayamo, eastern Cuba.