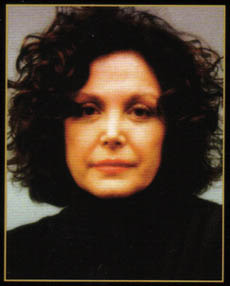 The daughter of Mexican film director, Fernando Rivero, Victoria Montesinos was raised in Mexico but educated at a French School, and lived for some time in Argentina and France. Starting at age 12 in the Mexico City studio of master Spanish painter Jose Bardasano, Montesinos learned the rigorous veladuras technique of painstakingly building up texture and depth through many fine layers of paint. By introducing marble, sand, and stone as textural elements, as well as stenciling techniques, Montesinos creates a subtle topography for her floral universe. Most notable, she is able to achieve a nearly subliminal incandescence through a medieval method of applying gold leaf to the canvas before painting. Because this process is so labor intensive and time consuming, Montesinos will spend two to three weeks absorbed in a single canvas.

I decided to make flowers my only focus of attention,” says Montesinos from her Manhattan studio. “I really wanted to explore and go inside their world, find all the textures, layers, and passages in just one flower. They are all small universes. I feel captured by their beauty. Flowers are an incredible way for nature to show the infinity of existing colors.”

“When I draw, I disconnect myself from everything and it is a delight,” states Victoria. “In my childhood, I was uninterested in conventional life and I felt there must be a higher reason for things. I thought life was boring until I understood that is was up to me to give life more meaning.” At that period in her life, Victoria chose a difficult path. She decided to paint with total integrity, without submitting herself to the judgement of the market, to the expectations of others, or committing to a style.

Introduced to Success
In the 1983, Victoria moved from Mexico to New York where she had a contract with one of the largest galleries in the United States to develop lithographic works. While there, she studied and worked with a complicated technique to produce high-quality lithographs. During one of the workshops in New York she met the noted surrealist painter Leonora Carrington with whom she shared many enriching experiences. Victoria’s knowledge and sensitivity enabled her to create and produce highly unique works that resulted in all her print editions selling out almost immediately.

Growth Continued
During that period, Victoria’s talent became widely known in the United States. In addition to selling a large number of lithographic editions, she also sold approximately three hundred original paintings. However, in spite of her success, Victoria decided to return to Mexico. Over the next few years she worked ardently in her homeland and developed a new style outstanding for its unique oil paintings and serigraphs on textiles.

The Next Step
In the mid-1990’s Victoria began to work with various galleries in the United States. She returned to New York with the sole intention of painting flowers. Her idea acquired large dimensions through her magnificent brush and was executed with great skill and abundant creative passion. “I decided to make flowers the focus of my attention,” says Montesinos from her Manhattan studio. “I really wanted to explore and go inside their world, find all the textures, layers and passages of just one flower. They are small universes and I feel captured by their beauty. Flowers are an incredible way for nature to show the infinity of existing colors.”